We've been experiencing car issues lately.  We are the proud owners of five vehicles and yet, at one point, not a single one was running properly.  The Blazer, my particular favorite, used to be mine.  It was what I drove daily for, well, it seems like forever.  But it started having problems a few years ago & it kept leaving me on the side of the road.  The final time, on a 100+ degree day when it conked out in a traffic jam and I had to push it off the road by myself while the nice gentleman in a pickup truck screamed at me to get out of the way, I threw a bit of a tantrum and refused to ever drive it again.  And I didn't for over two years.

But recently, I found myself forced to drive the Blazer once again.  Hubby swore all the issues it had been having were fixed.  He's been driving it most days for over a year and hasn't had any trouble.  Ok, fine.  I'm not happy about it, but I'll drive it.

And what do you think happened?  Yep, stranded on the side of the road.  With Cujo.  Ok, it was a mini Cujo, but a Cujo none the less.

I was cruising along on a 55 mph rural road with a dump truck and a tractor trailer about a quarter mile behind me.  Cruising along thinking that it's great the fuel issues have been fixed, but why in the world hasn't the a/c been fixed?  That's right - no a/c.  In fact, not only does the Blazer not have working a/c, but the heat is stuck on.  The out-door thermometer was registering 108, and I'm cruising along with the heat on.   And then suddenly, I wasn't cruising.  The car was still on, but we were loosing power.  And the dump truck & tractor trailer are riding door handle to door handle & gaining on me.  Luckily, I came up on a trailer that sits right on the side of the road & instead of having a driveway, they simply have a cleared area with no ditch to cross.  I pulled in & the car instantly died.  And the two trucks whizzed past.

I tried to restart the car, but it was obvious it didn't want to start.  I called dear Hubby & used every curse word I've ever heard.  Loudly.  And most of them twice.  I told him where I was & that he better come rescue me pronto.  I was not a happy camper.  Did I mention that it was 108 degrees?  And that it was the middle of the day.  A nice, sunny, nary a cloud in the sky day.  Within about 20 seconds, I was a big puddle of sweat.  And of course, my water bottle that I always carry with me was almost empty.

It was really, really hot in the car.  I was thinking about getting out and finding some shade to sit in, but there wasn't any.  The trailer I was parked in front of had a deserted look to it.  I didn't think anyone was home and it didn't have a porch or awnings or anything to create some shade.  And of course, no trees either.  The darn thing was surrounded by acres and acres of mowed grass.  And about that time, Cujo made his appearance.   Instead of a big, rabid St. Bernard, this Cujo happened to be a tiny little yappy dog. But I don't trust strange little yappy dogs.  They tend to be much more protective of their turf and out to prove the point that size doesn't matter.  Little yappy dogs seem to bite much more frequently than big, rabid St. Bernards.  I decided that no matter how hot it was in the car, I was probably safer inside than outside with Mini-Cujo.

I dug my Kindle out of my purse.  Figured reading while I waited would take my mind off my desire to kill my husband for ever suggesting that I drive that darn car and the urge to push it out into the path of the next on-coming truck.   Of course, the Kindle had just enough battery to turn on, then promptly turn itself off.

I turned to my knitting bag.  I never leave home without it.  I knew knitting would be tricky considering the fact that even my hands were actively sweating, but I needed something to do to entertain myself.  And wouldn't you know it - I'd never restocked the bag.  There were 4 different projects in it, all requiring another ball of yarn.  Yarn which is happily stored at home.  Argh!  The only yarn available was a tiny ball of left over sock yarn.  It was so tiny, I didn't even think it would make a toe of a sock.  But I cast on a few stitches anyway.  After all, pointless knitting is better than no knitting at all, right?  Besides, knitting calms me and it was getting harder & harder to resist the urge to push the car out in front of the next oncoming truck.

I knit a pointless little tube because 4 inch dpns were all I had in my knitting bag.  I knit and I knit and I breathed deeply & tried not to think about how hot and how mad I was.  Just as I got to the end of the yarn, Hubby showed up to rescue me.

Once home, the first thing I did was to drink a couple of gallons of water.  The second was to restock the car knitting bag.  While doing the restocking, I of course found the soggy tube of knitting I'd created.  Hmmm.  I bet this would fit over a beer/soda can.  I tested it out.  What do you know - a beer cozy! 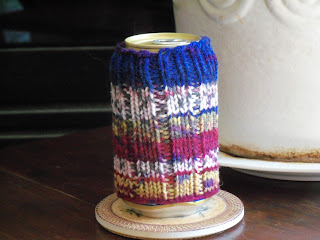 I'm calling it the Cujo Cozy.  And you know what?  I have zillions more little tiny balls of left over yarn. I could make zillions more cozies.  And as much as I hate those paper coffee cup cozies that come with store bought coffee, this knit one is pretty nice.  The can doesn't slip & slide inside the cozy like the coffee cups do.  This knitted one is absorbing the sweat off the can so my hand isn't getting all wet.  That is a pet peeve of mine - I HATE having wet hands.  My hand is also not getting cold from holding the can.   This is actually pretty cool.  I think I will make a few more.
Posted by Jeannie Gray Knits at 12:51 PM